I was excited to see this email from my client the Woodward Tourism and Convention Bureau. I hope to make the event, and bring back a report.

The Oklahoma Tourism and Recreation Department along with the Woodward Tourism and Convention Bureau invite you to attend the grand re-opening of the Spring Box.

Where: Boiling Springs State Park
When: 11 a.m. on Wednesday, September 1

Hardy Watkins, Executive Director of OTRD, and other state and local park officials will be on hand for the dedication ceremony.

Please RSVP to Leslie Blair at Leslie.Blair@OklaTourism.gov by Monday, August 30. 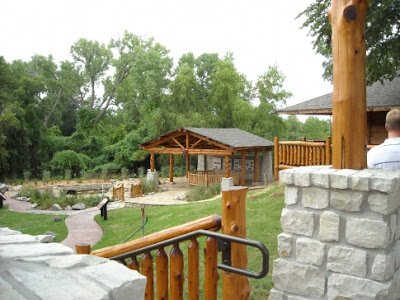 About the Spring Box Renovation
Boiling Springs State Park is named for one of the several natural springs in the park. At one time, these springs had the appearance of “boiling” as the sandy-bottomed spring was churned with the strong inflow of subsurface water.

The Spring Box is the structure that surrounds the spring and allows people to see the spring boil. The Spring Box renovation includes a new cedar log shelter and flagstone paving. The area was also landscaped with new planting beds, reflecting pond, and stream bed. Boiling Springs is one of Oklahoma’s original seven state parks and was built by the Civilian Conservation Corps in the 1930’s. The renovation of the Spring Box and surrounding areas uses materials and designs that are similar to the construction style of the CCC.

The renovation also includes interpretive signage that was developed to help the public better understand the history of the park, the geology and hydrology of the spring and the flora and fauna in the area. The parking areas, sidewalks, and viewing area were redesigned to comply with the Americans With Disabilities Act. This is the first major renovation of the spring area since the 1950’s. The cost of the project was approximately $785,000.

There are many other improvements that have been taking place at Boiling Springs over the past several years. There are five new playgroups located throughout the park, a new comfort station, improvements to the group camp, and a new park maintenance barn. Currently renovations to the pool bathhouse and an additional comfort station are underway. The total cost of the renovations at Boiling Spring is more than $2.3 million and comes from the Capital Improvement Fund.