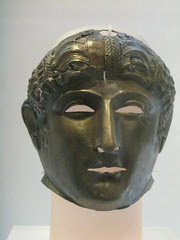 Young Roman soldiers lived, fought, played and died in Scotland in the early first century. They left behind this mask, used in military ceremony.

It's the unexpected things like this. We didn't go to Scotland to think about Roman history, movement of people, conquest and occupation. But climbing through the levels of history in the National Museum of Scotland, from pre-history, up to modern times, I did think about it.

The museum is definitely world class. I was happily lost in the pre-history for a long time. My husband intently examined the modern mechanical and engineering displays.

Ask how they moved the locomotive in there. The story is best appreciated when you're standing next to it.

The museum is right on the city bus tours, and well worth several hours of time.
Posted by Becky McCray at 3:24 PM